The first generation Probe's 4-cylinder (turbo and non-turbo) air flow meter is a flapper-type air flow unit. It works as a result of engine vacuum. As the engine draws more air and the vacuum increases, the flapper will open more. The angle of the flapper is translated into the air flow signal. 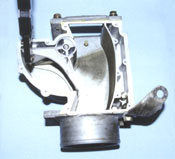 Do not attempt the following without an air/fuel ratio meter and considerable knowledge of the fuel system. Although adjustments are minor, damage can occur if improperly adjusted. 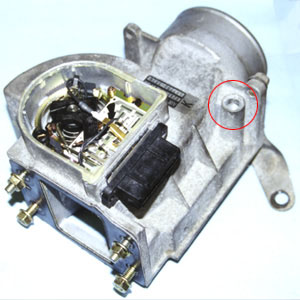 There is a hidden feature found on the 2.2L Probe's mass air flow unit. It allows slight adjustment of the air/fuel mixture. It is hidden under a plug on the top of the unit. Notice the red circle above. 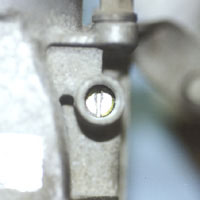 Under the plug is a screw that adjusts the mixture. To get to it, you will need to drill this plug out. Use a small bit to slowly drill into the plug's center. The plug is about ½" thick. Be careful not to drill too far where you might damage the head of the screw. Once you drill through the plug with the small bit, switch to a larger ¼" bit. Drilling through the plug this time should loosen it. Pull the remains of the plug out with needle nose pliers if required.

The way this adjustment works is that it increases or decreases the air flow into the engine, without the meter accounting for the air. This is done by turning the screw clockwise or counterclockwise. Turning the screw clockwise will lower the blocking cylinder (shown above) and reduce the amount of air that enters the engine. This richens the air to fuel mixture. Turning the screw counterclockwise will raise the blocking cylinder and increase the amount of air that enters the engine. This creates a leaner air to fuel mixture. Adjustments are minor, but this can be used to install larger injectors and lean out the mixture a bit. One note that should be made is that the vehicle's computer will always have final say in what the mixture will be, so adjustments my require some tweaking.